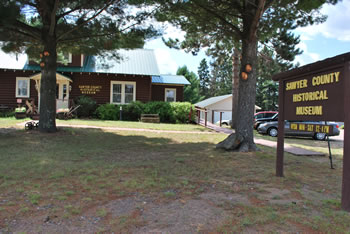 The original society was formed in 1957 by Tony Wise. It dwindled down and then was rejuvenated by Eldon Marple in 1979. The society started a museum in the Fuller Building on 4th Street in 1986. In 1992, the present museum building was obtained from the Department of Natural Resources. The lot the museum stands on was donated by Martin Lee and a foundation was constructed. The building was then moved to the site by Poppe Moving Company. The museum opened to the public in 1993 and many improvements have been made over the years. A furnace and air conditioning unit was installed in 1997. And an alarm system was added in 2009. 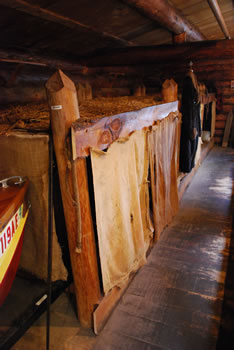 The garage was a hands-on project of a class from Hayward High School in 1997. The Bunk House was purchased by a donor at the auction of the old Cook Shanty Restaurant in 2000. It was moved to the site on County Highway B in 2007. A walkway and stairs were built by the Hayward Area Builders Association. All their labor was donated. This building was opened to the public in 2010.

The society is run by a board of eight directors and uses monies from dues, donations and fundraisers to operate. The Sawyer County Board of Supervisors also makes a contribution each year.

Sawyer County is located in the northwest corner of Wisconsin about 70 miles south of Lake Superior. It was formed in 1883 from parts of the Chippewa and Ashland counties.

Logging started in the area in the 1870s and continued until the early 1900s. After the trees were all cut down, the land was sold for farms and many resorts sprang up on the numerous lakes. Lumbering and tourism are still the major industries of Sawyer County.

Anthony Judson Hayward came to the Hayward area from Eau Claire in 1878 over the ice in winter. He realized that the location on the Namekagon River would make it an excellent place for gathering and processing the logs to be cut in the woods. The Big Mill was located close to the dam and the holding area for logs was where Lumberjack is. Many thousand board feet were cut at the mill and shipped on the railroad line that went through the city years ago.

The City of Hayward was formally organized in 1883. The Big Mill burned down in 1922 and was not rebuilt as most of the trees had been cut down.

The Pine and the Hemlock, by Eldon Marple

The French Influence in Sawyer County, by Eldon Marple

The Big Mill, by Eldon Marple